Morbo posted in the forum with a link to some great pics of his drawbot build.  I especially like the name “politzler” – which is maybe a kind of polite scrawler, or maybe a police scrawler, I can’t decide.

(I would insert a pic but they’re all rights reserved – just go and look at Morbo’s flickr set covering the build – cracking stuff, and see the delta bot pics too.  Dead jel.)

Secondly, just saw this one today – very impressive build from Dealywhopper based on a old board trolley thingy – what a perfect adaptation!  Brilliant write-up and so true: “Operating it is really more of a zen exercise, sort of like watching a plant grow.”

I admit though, my favourite part is on this other project that is written-up on Dealywhopper’s site: This monstrous stand for a dishwasher.  I laughed out loud, that last, terrifyingly familiar line:

“It’s certainly not the most practical piece of furniture we have.  Actually, it’s downright ridiculous, but I like it, and we’re sure as hell not getting rid of it, because it was a bastard to make.”

And the picture where the item is in situ, utterly dwarfing everything else around it is just gold.  Go and read it and encourage the building of more dealywhoppers.

Active forum member Woodpecker went looking for alternatives to the Adafruit motorshield, and came across this dual-stepper shield made by ITead Studios, and sold by Komputer.de in Germany. I got a couple, and they are very reasonably priced. These are pre-assembled, based on the A3967 driver chip – the same ones that Brian Schmalz uses in the EasyDriver boards.  They can drive upto 750mA per motor, which is a bit more than the L293Ds in the Adafruit design (though that can be upgraded with SN754410 drivers for those that are as infatuated with adafruit as I am). 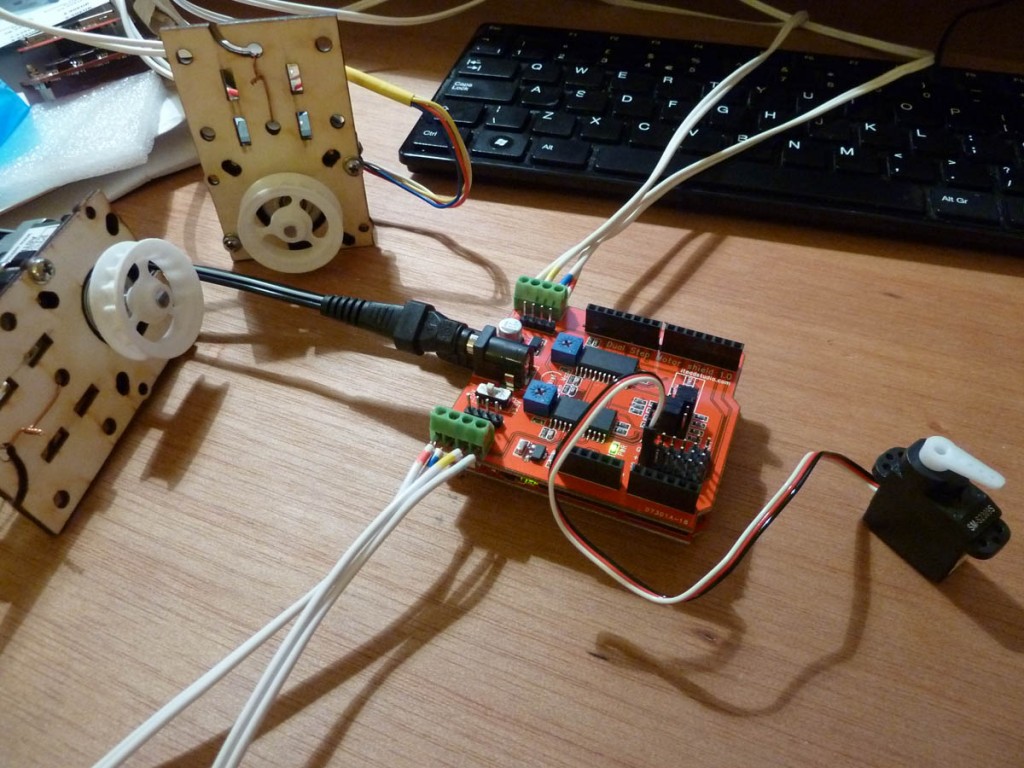 The main feature of this shield is that the A3967s are serial steppers, which means they use fewer pins, and the shield happens to use pins 2 through 9 on the arduino.  Which means that the magic pins 10, 11, 12 and 13 are free – and these are the pins that the SPI interface appears on in the Uno-sized boards.  That opens up the possibilities of using a pre-assembled SD card reader with the Uno, which is interesting.  Now I’d more-or-less given up on running an SD card with an Uno, because of the double-whammy of needing to rewire and because of the memory limitations.

HOWEVER, if this board removes one of those impediments, then the game is perhaps afoot again.  I can conceive of a firmware that is very minimal – just responds to vector graphic commands only, and is optimised for standalone drawing.  Is this worth having?  I suppose I can’t know until I try it eh.

The other feature of the shield, is that all the spare analog pins are broken out to three-pin headers, and the motor connections themselves are exposed as four-pin headers AND screw terminals.  So this could be used without the faintly comical terminal adapters that I’ve been making up so far.

The downside: There doesn’t seem to be a way to turn these off.  The EasyDriver breaks all pins out so motors can be enabled / sleeped, but this shield appears not to.  This is a bit of a blow, because it means the drivers and motors are energised as soon as the board has power applied, and it can’t be turned off programmatically.

The A3967 chip is also less tolerant of bad behaviour like unplugging the motors while it’s on – this is much more likely to damage the ICs than with the L293Ds, so be careful.

Oh and one other thing – these are HOT!  Makes the whole arduino hot.  I believe the IC will always be hot, and probably well within threshold, but I think heatsinks will be the order of the day again.

Anyway, I have released a new firmware that is built for the ITead shield.  It is otherwise identical to the regular firmware, but dispenses with the AFMotor library. The servo pen lift is now also controlled from pin A0 (aka d14), which is the first three-pin header in the block on the motorshield.  You can see that on the picture.

Just a little heads up for future reference: MakerBlock has made a neat little writeup of Dan Newman’s TSP art tools.  It’s more simple than the original EMS guide and better than the half-baked thoughts I have jotted down.

How futuristic does this look. 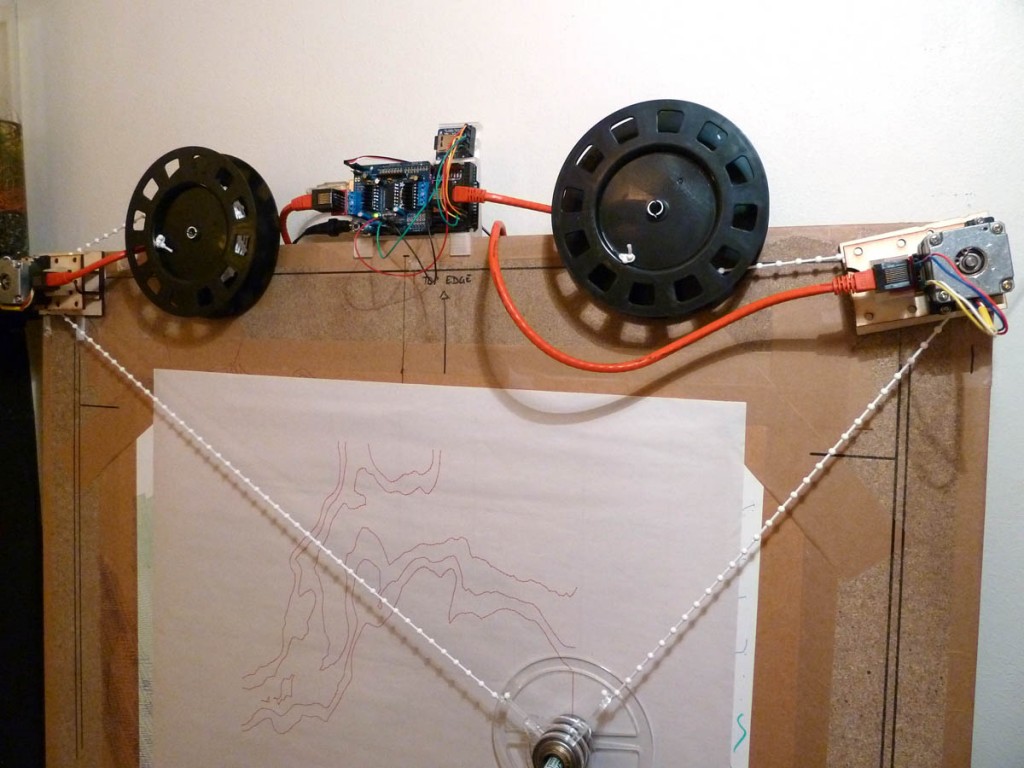 Well ok, maybe not futuristic.  But this is a new counterweight replacement, it uses spring-loaded take-up spools from a retractable washing line.  These have power springs in them (like metal tape measures).

The second new thing is using RJ45 network cables as motor power leads.  This is basically a way of getting cheap extension leads I don’t have to make up myself.  Making up the cables was the really onerous bit about kitting, so this is the solution to that, as well as probably being more reliable. The connections are very neat, and the cables are very affordable, and the extra conductors means that it’ll be quite easy to piggy-back endstop detectors on the same cable. I’ve used the little sparkfun breakouts with 90 degree pin headers to connect into the screw terminals on the motorshield.  The network cables are a lot stiffer than the old ones, so I’m a bit worried about the strength of the connections, but I’m pretty pleased with it.

Now, shepherds pie and carrots for dinner – rock on.