My manufacturing process is sometimes evolving. It’s not a complicated one, but there’s enough steps and nuance that I benefit from reminding myself what I’m supposed to be doing.

A run of bad Polarshields last year prompted me to start being a lot more careful about how I assembled and recorded the assembly of them. I started putting little journals on each one, which were just a strip of sticky tape with any story on them. Anybody who bought a Polarshield will have found such a thing. 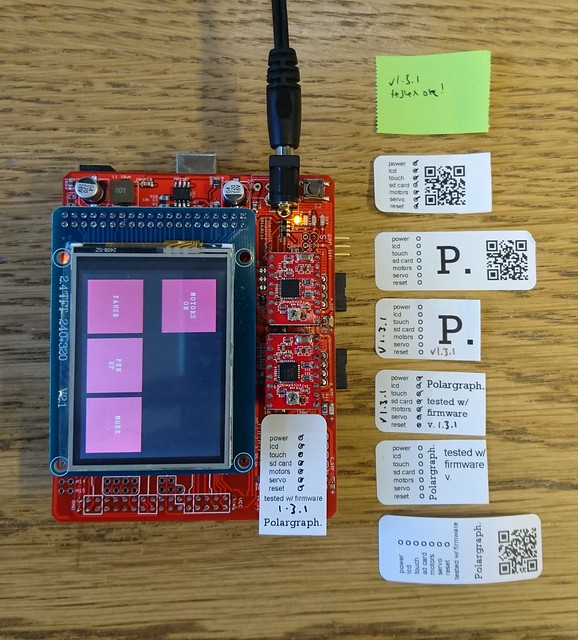 I recently kicked myself a couple of times in a row when I thought I’d forgotten to test a certain aspect of the board, and had to open up a pile of sealed parcels to find out. Fortunately in that case, there was no problem, but I made up some new labels to help me not make a mess in the future.

The evolution is in the pic. The QR takes you to Building a Polargraph from a vitamin kit on the wiki. The final version is less handsome, but more useful, and there’s a beauty in that trade-off.

I like seeing these kinds of “work in progress” pics on other makers’ blogs.

The polygonizer work was prompted by some excellent troubleshooting by Visualbyte and DaniK on two threads in the forum:

I’m not convinced it will point-blank solve your problems, but gives you an extra tool to experiment with.

(But here’s a link to the most recent release to help this post stay relevant in the future.) 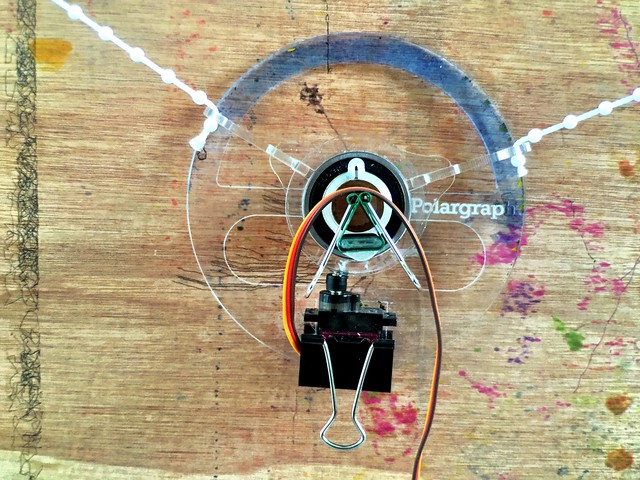 Fans of the Drawbots Flickr group will have seen Olly O’Neill’s work. He uses a Polargraph hardware kit, but with custom software to produce beautifully glitchy, organic drawings. After drawing, Olly embellishes the drawing with ink, and water, adding a painterly and unique final appearance to these artworks. 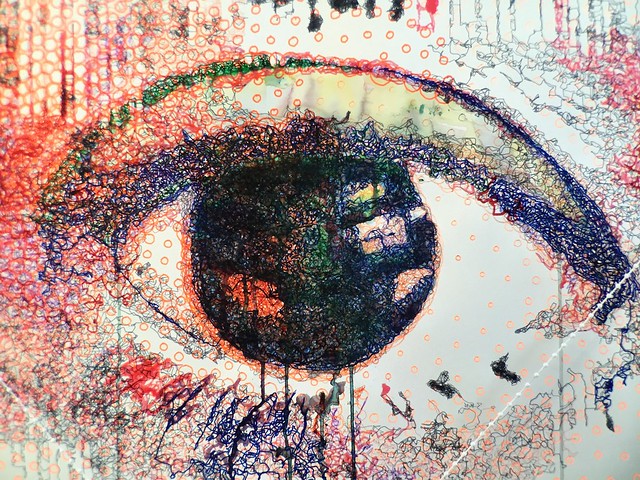 Made up a new code bundle, wrapping up a couple of recent changes.

Given recent discoveries, I wonder if the spate of recent touchscreen problems (see http://www.polargraph.co.uk/2015/10/touchscreen-issues/) are to do with the weird startup problem that I described in that post, OR to do with the base stupidity I displayed by including a in-development version of the polargraph_server_polarshield firmware.

It actually had USE_LCD turned off in it.

I’ve fixed it, rebuilt it and repackaged it and apologise if this made you mad.

An interesting discovery is that the newest version of Arduino IDE (1.6.6 – it’s only a week or two old) CANNOT compile Polargraph firmware. So, thanks Arduino dudes, for breaking everything again – it looks like two can play that game.

So use Arduino IDE v1.6.5. Until I figure out what’s screwed.

I’ve had a rash of problems with the touchscreens on bare Polarshields!

Over the last six months or so, I’ve noticed an issue where the touchscreen doesn’t work after booting. It looks ok, and updates fine, just no response to tapping.

I solve this by discharging the static from the device, while it is unplugged. I do it by either leaving it for a couple of minutes, unplugged, or by touching the metal USB socket housing, and rubbing an earthed piece of metal (it’s a wall-mounted shelving rack that I know happens to be screwed into the grounded metal studding in the wall). Handle it carefully, by the edges of the board while you’re plugging it back in.

I didn’t write anything about this until now, because until recently I was hoping this was a problem that only I was having! I think the touch IC must be being blocked during it’s boot process, or something like that.

I have handled hundreds of these, and the screens actually breaking down somehow is very rare. Having them rebel against their touch programming happens every day though, and I always fix it this way.

You can test your screen by using the UTFT and UTouch example sketches, but with these updated lines: 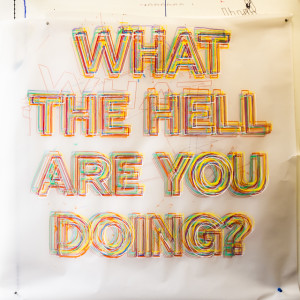 The drawing above is by Ben Young. I love it.

Released new code bundle. Only code change is that I’ve mended this line about how the crc_check pre-computed value table is defined in polargraph_server_polarshield.ino. The only purpose for this is to allow it to compile in the newest versions of the Arduino IDE (1.6x). If you aren’t using that version, you don’t need to update anything.

Whitley Bay-based PhD student Carl Gregg has a show opening in a couple of days, featuring elements of his research made material: 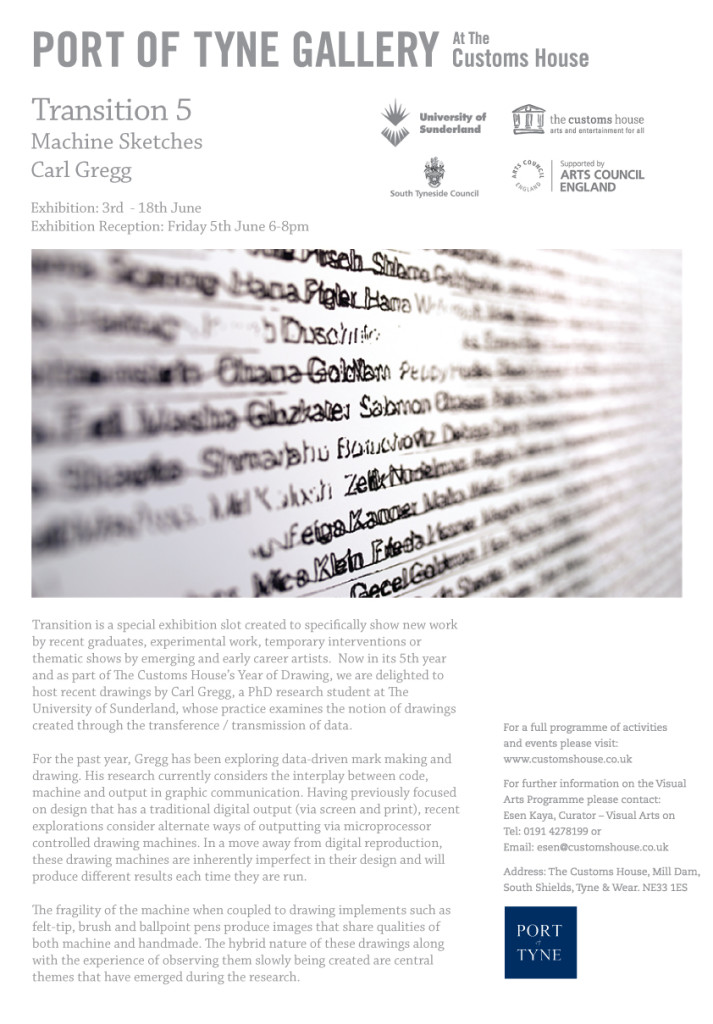 Gregg has used a couple of PolargraphSD machines in his work for the last couple of months, and wrote custom software to drive them over long periods of time, presenting them as performances. I really like this experimental approach, and the materialistic artefacts (like the missing, ghosted names in the drawing above) add depth and resonance to the work.

If you find yourself in Newcastle or Shields in the next couple of weeks you should go along to The Customs House and have a deek! Thanks to Gregg for letting me know about this. 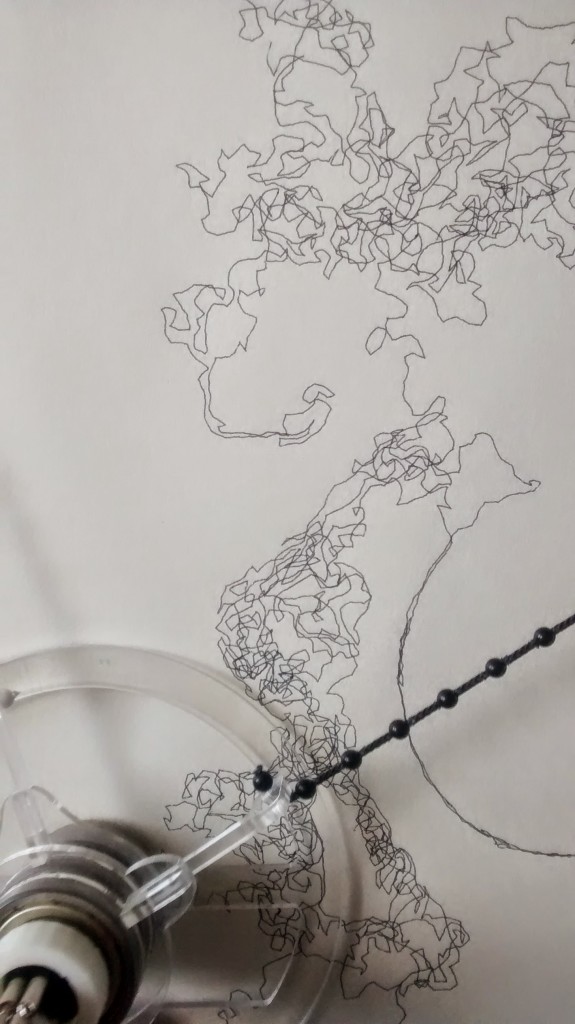