I posted a note out to the mailing list (http://eepurl.com/dhVafP to add yourself) announcing that the first eleven machines were in stock (https://polargraph.bigcartel.com/), and within two hours they had all been claimed! 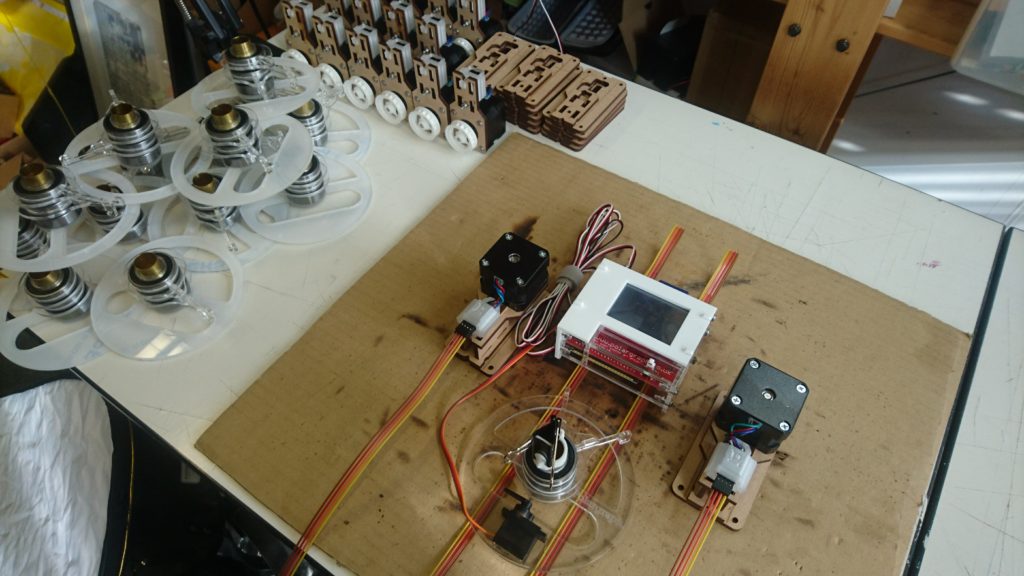 I was amazed and encouraged and excited, because I was rather expecting that most of you would have given up waiting after getting almost a year’s-worth of “maybe next month” from me… So I’ve got a few left of that first batch still to pack up and post out, and then I need a bit of a pause to wait for some more lasercut parts to come in (congratulations to my lasercutting lady for her new baby – I can’t really complain too much about that delay!).

I got a big shipment of power supplies earlier this week and have half a dozen machines-worth of parts absolutely ready to go, bar acrylic cases. I’ll list those as soon as I can, and send a note out on the mailing list to those who have ticked the “tell me when you have stock” box.

Subscribe to the mailing list to be notified. If you’ve missed out this time around, please be patient. I feel very confident in this new design.

The machines are shipping with firmware v2.0.1 onboard. This is more-or-less feature complete, matching what the old MEGA-based PolargraphSD could do. The main thing missing is the Norwegian Pixel style.

I’ve since worked up firmware v2.1.0 which reinstates the Norwegian Pixel style and also adds menus and buttons to the onboard touch interface to change machine size directly. It can also change the page size and position. This doesn’t really do anything yet, but I’m going to put a bit more thought into how the machine gets used in practice, hopefully helped by my beta testers Patrick (Wagner – Blackheart Press) and Chris (Bazant-Hegemark http://www.bazant-hegemark.com/) who will be testing this out in a workshop for The Royal Institute of Art Stockholm soon.

Since starting shipping I’ve already discovered an irritating issue where a 160 second pause randomly appears while drawing. It seems to be limited to USB traffic (I mean it doesn’t happen when drawing from SD card), and it doesn’t actually crash, it just stops to think for a couple of minutes. I’m sure this is a timer overflow or something like that, but these microcontrollers are hard to debug. That’s my number 1 priority because It Is A Stinker.