The new Polarshield v3.0 is a refreshed version of the core Polargraph hardware. It has been re-designed from scratch and snips out a few of the snaggles that the old machine had.

It allows integration of:

So the only real difference is the controller, which is a fast, 32-bit, dual-core device, with a real-time operating system (RTOS), oodles of memory AND built in bluetooth and wifi features. There is a working Arduino-based toolchain for this ESP-32 device, but it also has the horsepower and memory to run micropython. 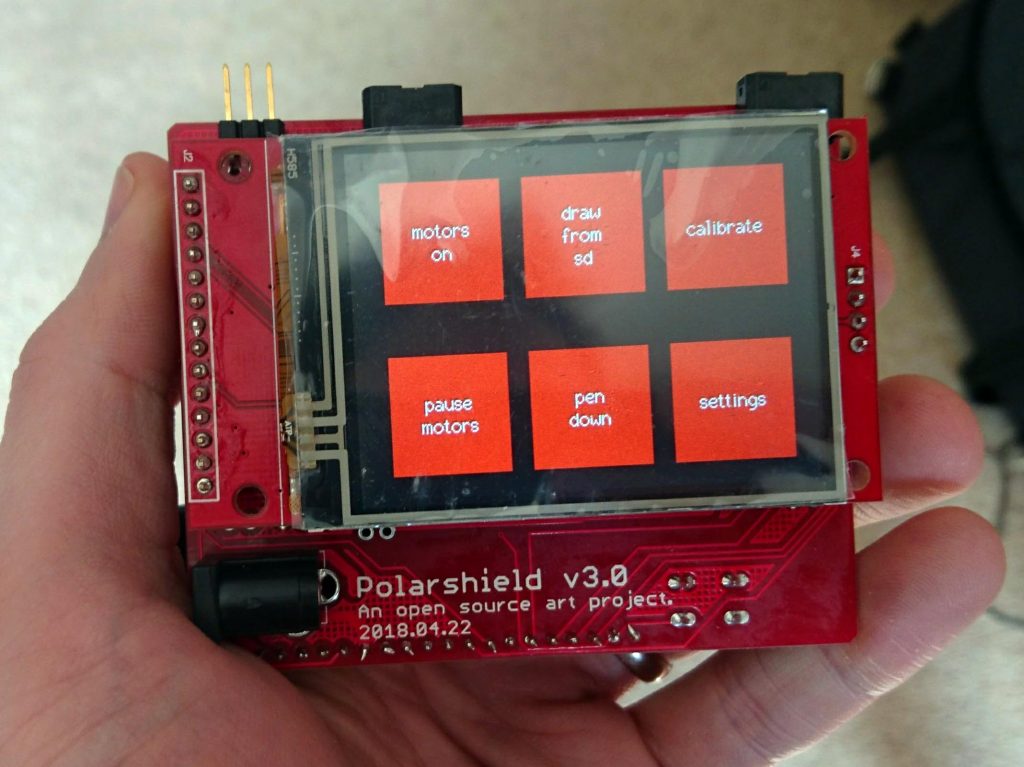 On the Polarshield itself, the hardware design is simplified because the ESP-32 is a 3.3v device and so are the stepper drivers, touchscreen and SD card, so there’s no need for level shifting. The LCDs are of a more modern and widely supported design too, so I expect to have fewer problems with them.

There are spare pins I’ve broken out for:

I haven’t yet implemented any features around the encoders, endstops, wifi or bluetooth, and might never do that.

The Polarshield v2 has never been a reliable build. The straw that broke the camel’s back was earlier this year when I was building a batch and I ordered 20 boards, built them and only got six working Polargraph machines out of them. The LCD that it uses is growing to be somewhat esoteric in that configuration, and so it’s hard to debug. It uses a kind of simulated SPI which just isn’t reliable enough, or has too many odd interactions with other parts of the circuit.

The new 5v step-down power supply is an economic choice. I’m using a little off-the-shelf mini-assembly with a MP2307 and an inductor on it, rather than building the supply right onto the board itself. Amazingly, the little assembly is available to buy (ready-made) for less money than it costs me to buy a single MP2307 chip on it’s own.

The ESP-32 is a little cheaper than a good Arduino Mega-2560 clone. The current Arduino toolchain is a bit of a dog to set up, but dedicated developers has done an amazing job porting libraries to it. It’s dead fast and has a good small footprint. Mega-2560s are huge. Natively running at 3.3v is a bonus and performance with SPI-based touchscreens is phenomenal.

This is a platform that could easily take us into PolargraphPro territory, with encoders and endstops to make for a safe and reliable continuous drawing experience. The MCU is powerful and the wireless features are very tempting.

However, I have no immediate plans to implement any new features and will focus on getting old ones ported and re-worked where necessary. I’ll probably take this opportunity to dump a few lesser-used features too.

If you want to be alerted when these reach stock, or you’re interested in email updates about the project, you can sign up to my mailing list and choose what kind of things you want to hear about: