I got a pile of boards back from the maker recently: Polarshield v2.4 (https://github.com/euphy/polarshield_hardware). Here it is alongside the 2.2 version (on the left)  to show the progress. 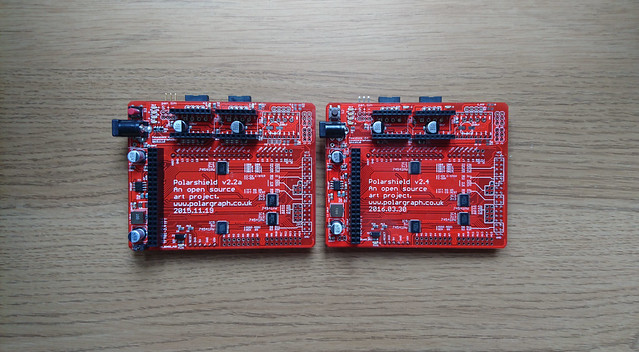 Not much right? There’s no revolution, indeed, but a couple of minor changes that makes it easier to build.

And the great thing is, it works, ha!

I’ve been taking some time off the Polargraph shop lately, because of work pressures and a couple of other things. It’s been really nice not to have to rush to the workshop every hour of the day to keep on top of things, and I’ve been able to do a little development here and there.

I think I’ll be back eventually, but maybe in a couple of weeks, and I might try a different manufacturing pattern.