I’ve got half a dozen Polarshield PCBs left, but I’ve marked them as “sold out” in the shop.

I’m tired. I’ve had a few technical set-backs recently, that would be merely irritating if I was only make two machines a month like this time last year, but it immediately escalates into a full car-crash when I’m making a dozen a month – there’s just no room for mistakes, all the stakes are higher, and things move faster, sell out faster, need more careful management and delays cause more people at a time to be annoyed.

Not a bad problem to have? Well that’s true, poor me, boo hoo, there are worse problems, and I genuinely thank all my customers profusely, and everyone who has joined in on the forum and by email – actually by far the best bit of the project.

But I’m going to work to get this last problem sorted out (accursed SD cards and power management, I do bite my thumb at thee), and then pause my sales and manufacturing department (that’s what I’m calling my hands this week) for a bit to review the project as a whole.

I have an installation to work on in February, which will hopefully be presented as part of the Edinburgh Science Festival in April, and should be jolly exciting, and result in some neat new pieces of tech and software – encoders and a proper library at last! Right now I would not be at all disappointed if that was the last Polargraph machine to roll off the production line – the last of the V8 Interceptors, as it were.

However, let’s be realistic, I suspect the lure of the humming motors, the clattering of beaded cord and the pleasure of visiting my favourite post office lady will soon bring me back in, and … with upgrades.

Polarshields have always had a space for an external power input. This is so that you can have a high voltage supply to drive the motors, while letting your arduino, and all the logic chips run on a standard 5v, or USB supply. 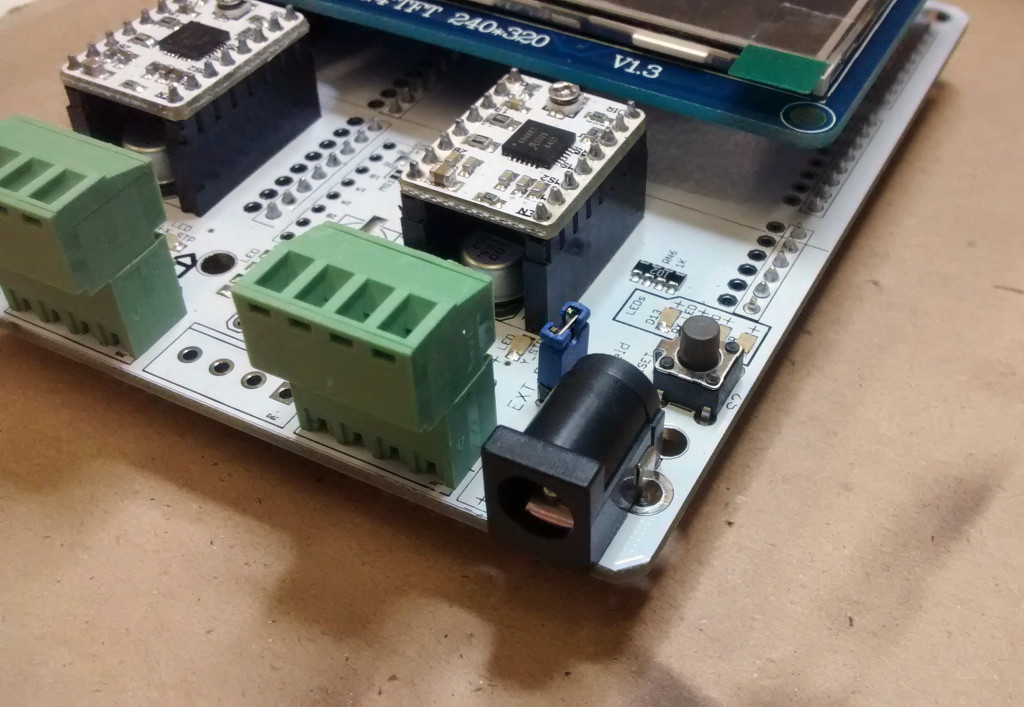 I got this idea of running two power supplies from the Adafruit motorshield. In their case, the reason was that when the motors started sucking down the power, the voltage supplied to the arduino would drop below 5v for long enough to cause a reset.

I’ve never had that exact problem, but I don’t like running an arduino on a high voltage, when there’s also a high current (like when running motors). The voltage regulators get hot, and while they are within tolerances, it’s not right, and always makes me worry when I put my fingers on them.

The machines I sell are protected by the case, and I was overjoyed when I got a new batch of Freaduino Mega2560s through to use in them, because they are the only arduino compatible boards I have seen to use a high-current, switching voltage regulator rather than the hot’n’cheap linear regs used everywhere else (including the genuine Arduino). These little chips are efficient and stay cool under lots of current.

However, when you buy a Polarshield on it’s own, or in a vitamin kit, you can plug it into any old board. Because they are exposed, it is so much more obvious that something is getting hot. Again, it isn’t dangerous with the motors I use in the vitamin kits, and at low voltages, but if you want to use bigger motors or run at higher voltages, it will not do. The heat makes it clear that there is no headroom.

Historically, I’ve not soldered the external power jack in, but I have a bag of them and if anybody wants one, I’ll post one over. From now, all polarshields will include this jack, soldered in – unless you drop me a line to say otherwise.

It was grand to see one of our gondolas pop up while out on safari: Dan of Maniacal Labs has put together a nice drawbot with a Go / Pi based control system. There’s still a microcontroller in the mix, and a couple of Brian Schmalz’s BigEasyDrivers.

So I got a recent report from a soul who was impeded by an SD card not reading in his new PolargraphSD machine… And these are cards that I’d supplied along with the kit mind, so you’d expect them to work right?

Well, I did too. I could replicate his issue perfectly – New 4GB Kingston SDHC card (from this giant batch I’d patted myself on the back for getting such a good price on, and so many!…), that shows up during the Polargraph boot sequence as having no usable partition. Oh. Yet try the same card in an older machine kit and it shows up fine. Huh. What’s that, ah the touchscreen (which incorporates the SD reader, and I buy as a discrete unit) is now v1.3 rather than v1.2. Hm. I hadn’t noticed that.

Yet the 4GB cards work fine in everything else I put them in, they read and write and format fine on a computer. So that’s a problem. Luckily for me (and the next couple of orders) I _do_ have some spare 2Gb cards that work fine, so it’ll not slow delivery, and of course I’ll be sending a replacement out to anybody who has got one of these 4Gb cards late in December. That was obviously a goof.

Furthermore, the 4GB card works ok when powered over USB, but not if a higher-voltage supply is connected as well (or instead of). It’s a power supply or signal level issue.

In software, this kind of regression testing is second nature, in hardware, I suppose it should be an even higher priority because the stakes are even higher. In software, unit tests can be rattled out in an afternoon, and can be messed up a hundred times with only a time penalty. In hardware mistakes are expensive, and making up test jigs is another venue for mistakes to occur in.

None of that is an excuse, it’s just a convenient explanation that I’d give to the pointy-haired boss (which in this case .. is myself …  that’s frightening). It sounds comically like the same excuses I’d give to bosses in bygone times about why it wasn’t worth doing unit testing in software, ha. Embarrassing.

The devil here, if we must have one, is in the detail lost during the commoditisation, homogenisation of resources and products – On paper, v1.2 and v1.3 of the reader are identical, and the SD cards also are identical. No reason to think they wouldn’t work together.

So, the takeaway is that if you ordered a PolargraphSD and got an SD card that isn’t working in it, and I haven’t already been in touch with you, drop me a line, or buy a replacement 2GB SD card and bill me!

The reason I’m dwelling on these issues of delays and problems so much, is not [just] because I’m a masochist, it’s because I think it might be useful for other folks who are venturing down this same kind of path as I am. Not helpful directly, but I admit I always found the war stories inspiring.