I’m finally on top of assembly so can pause for breath.  Thank you to the folks who are still waiting, your machines will be coming to you in the next week or two (at the most).

I wanted to let people know that there’s a couple of neat features in the Polarshield, the first of which is an XBee-shaped socket that can take a wireless transceiver. 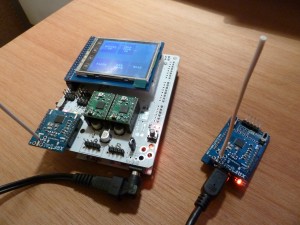 It’s as easy as that.  There’s a weak line in the case that can be cut away if you wanted to do this.  This is a great way of simplifying installation of a polargraph machine in a particular space.  I used a wireless connection just like this in the Spectrum Arts machine so that I could do the machine setup / calibration manually and do any little pen tests I wanted to make sure ink was flowing, then draw from SD.  There I used XBees, here I’m using XRF modules (and a Bee Adapter for the PC end).

One foible I came across with my XRFs (maybe I was being dumb) is that I couldn’t get my PC to talk to the PC-side XRF any faster than 9600 baud.  Which is unfortunate because the default rate that the polargraph controller speaks at is 57600 baud, so I added a property to the controller that changes that rate.  If you need to use it, you’ll have to edit the properties file – there isn’t a visible control for it in the application itself.

But once that’s done, it just works as a serial cable replacement: Great!  It doesn’t work for reprogramming the arduino firmware yet – I tried to get that working but never did, so you still need to use a USB cable for that.

A wireless module is not supplied as part of any kit – I decided these are still too expensive, and a little too far outside my expertise to start troubleshooting, but the socket is there for those who would like it.

The Malthusian Paradox is an ARG, or rather “An immersive transmedia narrative experience, played out online and in real life” that is currently is running in Nottingham – have a look here http://malthusianparadox.com/?p=208.

The project uses a couple of Polargraph machines, along with Adam Sporne’s exciting Drawnomic machine in it to reveal, slowly some clues – I’m excited to see how it turns out!

Good news: Motors are here at last.  First couple of orders will be heading out the door this weekend.  Thank you to all the folk who have been waiting so patiently – I appreciate your understanding.