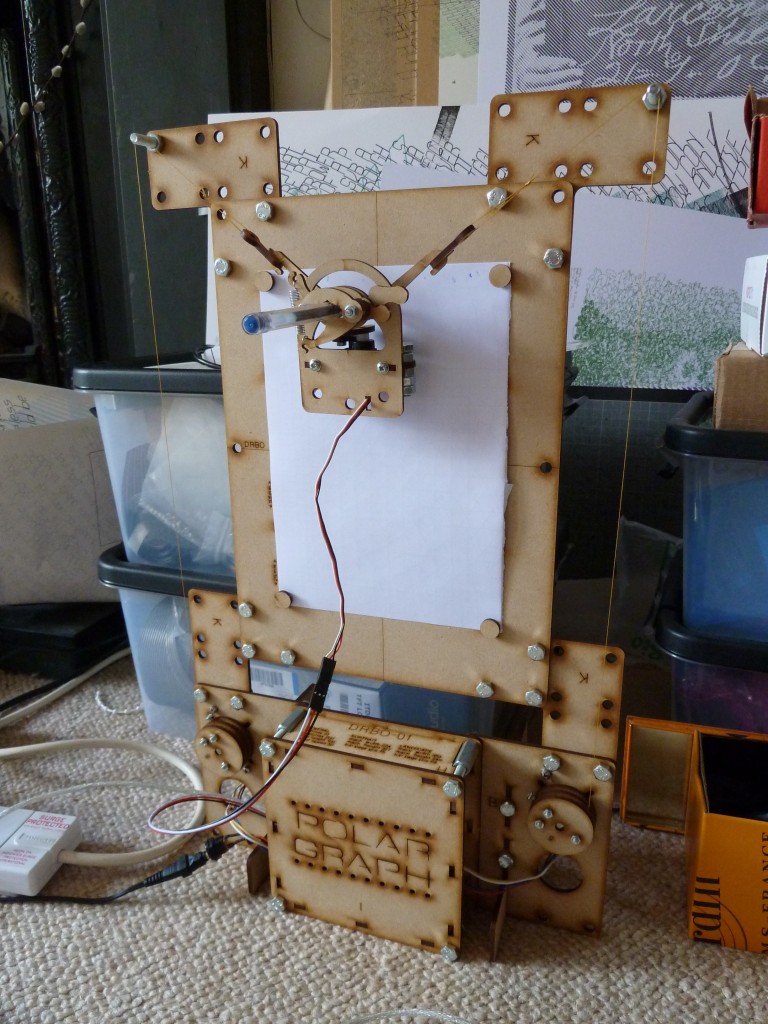 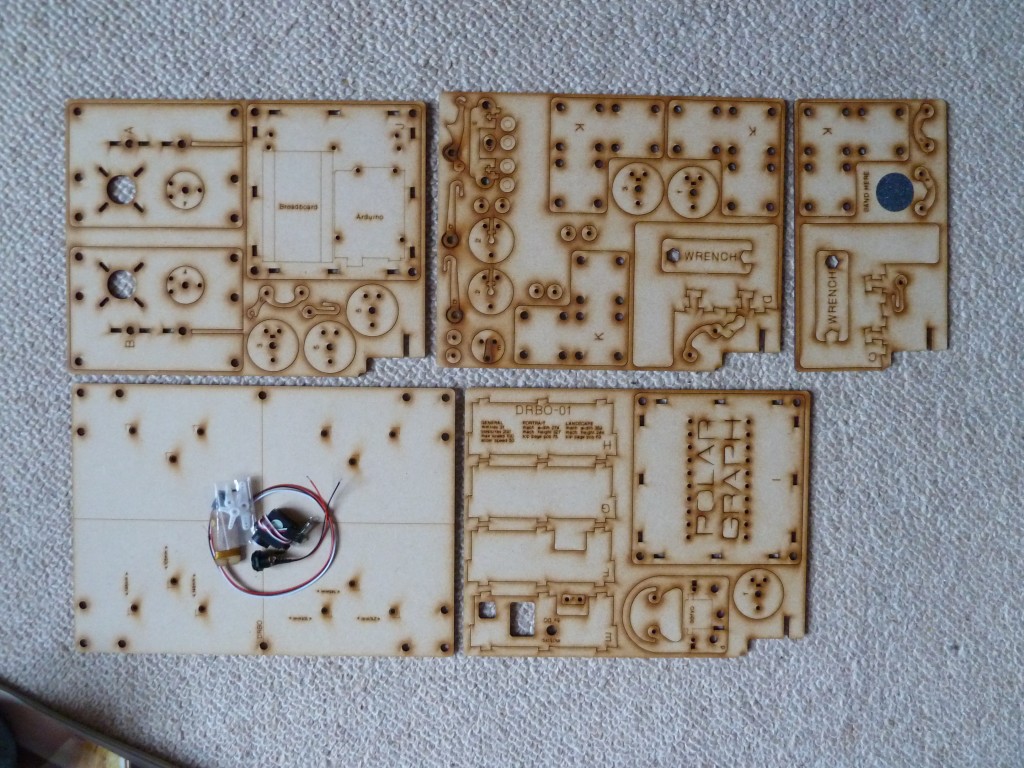 To mark the Edinburgh Festival(s), I’m drawing most days in the window of Spectrum Arts, 317 Cowgate, Edinburgh, with a big chalk marker. I’ll add the pics here as they happen – any suggestions?

So this is the real star of v1.2: The norwegian pixel. 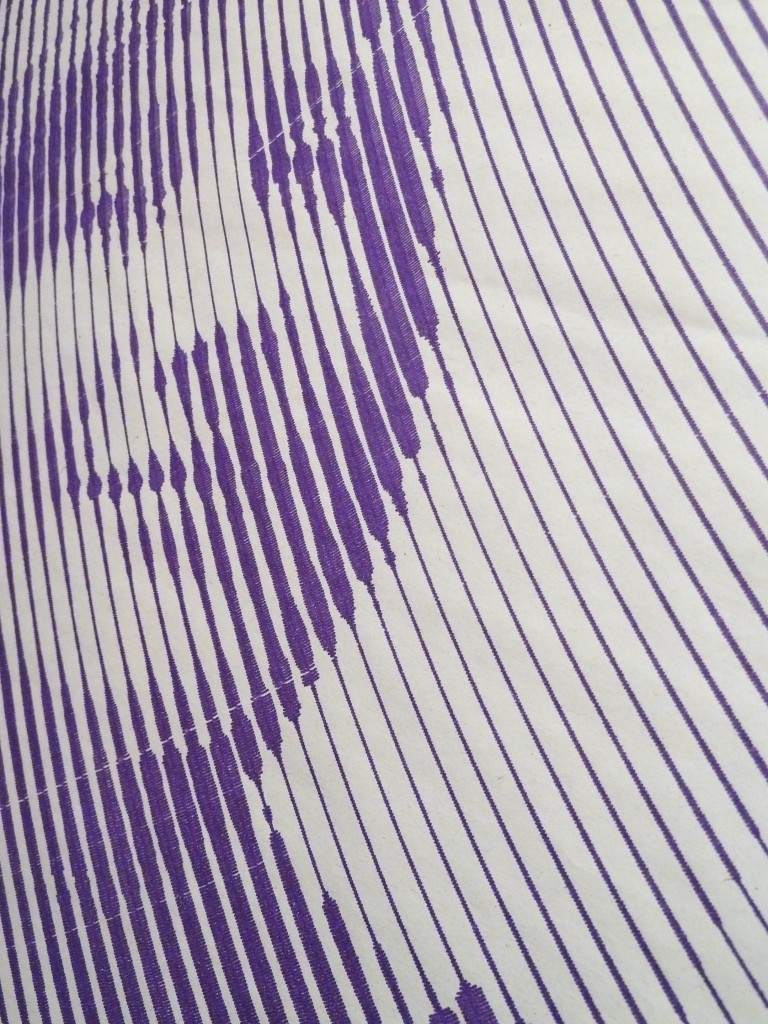 I haven’t done an awful lot of testing of this, but the initial results are beautiful.

HOWEVER, I have noticed one issue – there are regularly spaced breaks in each row, some more obvious than others.  This is because of the way the beaded cord slips on the sprockets, and it’s a problem I actually expected to see before now.  The issue is that the beaded cord is not manufactured to very close tolerances, so the sprockets are rarely a perfect size.  It means that each beads-worth of rotation, there’s a little slip while the beads pull taut into the teeth.

There isn’t really a solution as far as I can see, as long as there’s even a mismatch between the circumference of the sprocket and the length of a piece of cord with the same number of beads, there’ll always be a little period where it falls forward.

Note that I think it’s only a problem for machines with beaded cords – if you use reels of thread and smooth bobbins, you’ll be fine.

–EDIT I goofed a bit with the various firmwares, and half the stuff didn’t work. I’m a bit puzzled how I didn’t notice, but there you go. Anyway, I’ve fixed a bunch of stuff, so if you had problems with the newest stuff, give it another shot.

Two exciting new features for PolargraphSD.  Both of them rely on the new roving area facility.   This is essentially nothing more than a way of specifying a drawing “live” area, and telling the machine.  Previously the machine has had very little concept of state, and (more-or-less) just did what it’s told.  Now, by setting a rove area, we can tell it to limit its behaviour to just that area.

Both of these features are very GOOD ones.

Most of the roving functions are hidden away on the roving tab, but it shares buttons with input.  Define a area on-screen by dragging a selection area, or selecting the frame.  Now just press send roving area and a new command is sent off that sets this in the machine’s live memory.  This area is volatile, so if you reset, you’ll need to resend.

A vector sprite is nothing more than a small vector design, but instead of existing in the coordinates system of the machine, it has its own coordinates system.  So when I have made up a font with each letter being one sprite, each letter has 0,0 at the bottom-left point.  Capital letters are 1.0 high, and around 0.4 wide.  What unit these values are measurements of is irrelevant, because the machine can now scale them to any size, and  draw them anywhere, and rotate them to the four cardinal native polargraph directions. 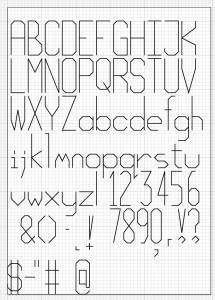 Vector sprites will be able to be lots of things in the future, but the first application is writing text.

In this case, these are letter form files, and there’s loads of them which is why they get their own directory on the card.  And because this is being done in the context of writing, then the machine knows that if it finds itself outside the rove are, then it knows how to work out where to start the new line.

The grid size sets the text row height, and the pixel scaling controls how big the actual letter forms are scaled within those rows. 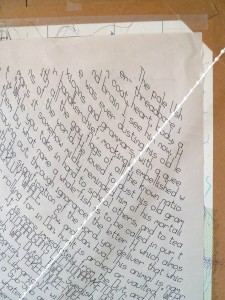 In practice, this has the ring of Jack Torrance to it, which is nervously apt.  It’s possible to read fragments, but because each line is longer than the last, and because of the curve and the distortion, it’s almost impossible to figure out how the lines follow on from one another, and very easy to lose track.  Quite disorientating to try.

For this to work you need to copy the sprites folder onto your SD card.

Get the new code, controller and things from the repo

Or in the binaries bundle.  I put the mac and the pc version in together – let me know if there’s any problems with doing it this way.

The other new feature is actually more significant, but a bit more simple: 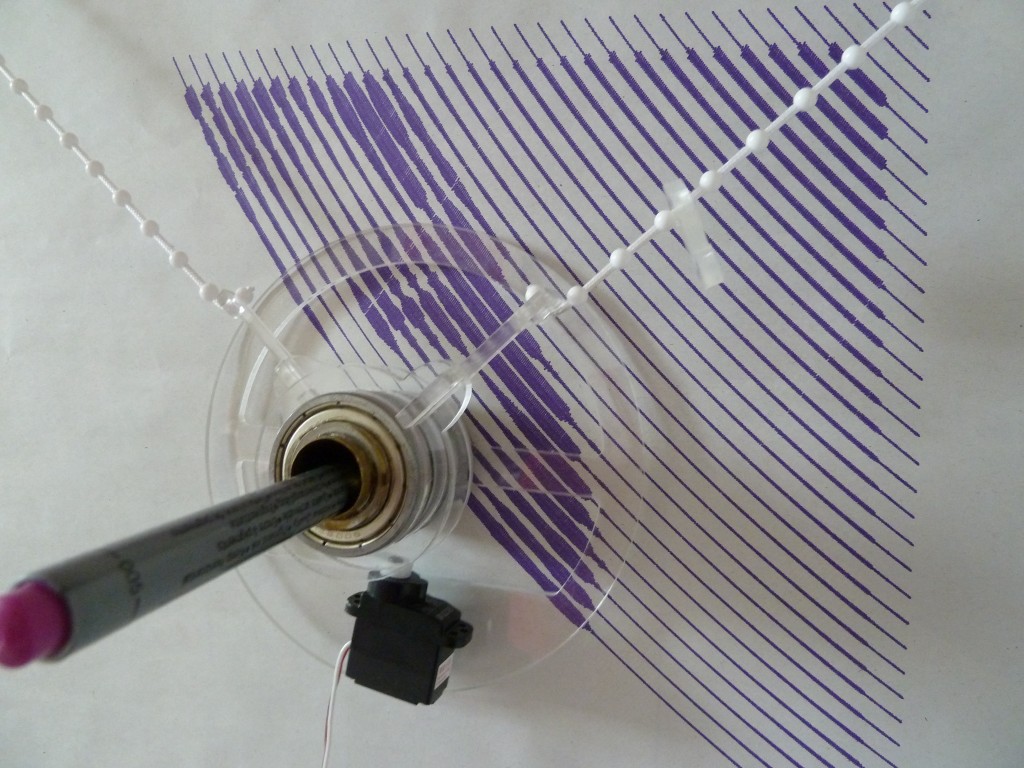